Let me tell you, they do not mix! A group of eight motorcycles with an SUV in the lead and a pickup towing a camper/toy hauler driving "sweep" (as in sweeping up the stragglers) left home after breakfast headed to Mt. View, Arkansas. We knew the weather, but also knew that we would not/should not be caught in the big middle of it. However, we were caught in the tail-end of it. North of New Boston, just over the Texas/Arkansas State line, we started running into sprinkles. Our fearless leader pulled over at a roadside park and we donned rain gear. "I" wanted to turn around to seek shelter. Did anyone listen to me? Nope.
The wind and rain was pretty ferocious there for several miles, but we made it to DeQueen in sunshine. My legs were dry, my left foot was not due to a leaking zipper in my motorcycle boot. (Make note: Purchase slip-on boots with no zipper next time.) My raincoat failed. I don't know why?! When we got "back into the motorcycle business," I pulled out my old raingear. The pants were too small, but the jacket fit fine. Who woulda thought that the jacket would fail? It was only 25-30 years old. ;o)
We picked up two more bikes and a pickup in Hot Springs from those who went up Thursday night.
North of Morrilton, AR, we found the tornado damage that those in vehicles heard about on their radios. Let me tell you...pictures on the news do not convey the amount of devastation. I've seen them before, and I saw them Friday night on the news. Seeing the foundation where a home once stood and the debris from the home piled against trees, brush, and a fence row as if the foundation had been cleared by a leaf blower... In that community of Center Ridge, a man and his son lost their lives. Every trailer house on the road they lived on was destroyed...they were in one of them. Two lives were lost there, but so many more could have been. I've been praying for God's grace for them all.
Oh, almost forgot, on Thursday, my mother and a couple of her friends drove to Mt. View in her Gran Caravan - not on bikes. After we checked in to our lodges/cabins at Mt. View, another couple arrived bringing our totals to 9 bikes, 2 trikes, and 25 people.
My brother (oh, our fearless leader) and I have been going with our family t 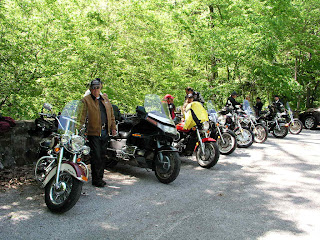 o Mt. View for over 40 years. We told everyone what was available in the area and groups went their own way. Some shopped, some went to the Folk Center, others toured the Cavern. We all ate! After lunch, most of us went to see where the spring comes out of the cave. I finally pulled my camera out. Once again, we parted with some going shopping and the rest of us taking a ride to see the beautiful scenery.
Our group did have one injury. One of the ladies missed the first step from the loft and 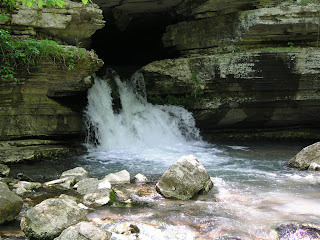 fell the remaining 10-steps. She had surgery on her wrist in Batesville on Sunday. Since this is just Monday, I haven't heard anything else. 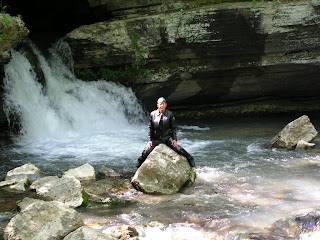 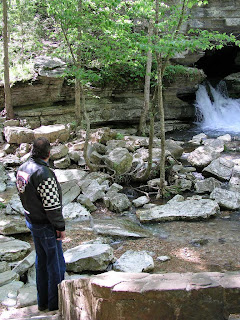 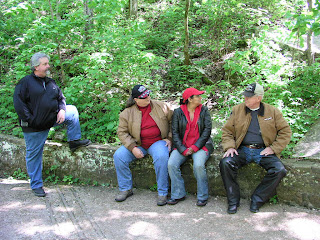 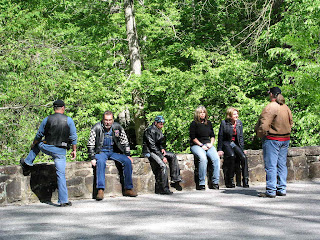 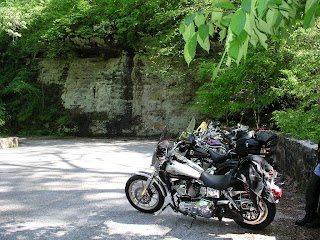