Yesterday was Mardi Gras, (French for Fat Tuesday). Okay. You ask, "What's Fat Tuesday?" It is the Tuesday before Ash Wednesday. It is the last day of 'decadence' before Lent begins. This link can explain it better than I can.
http://www.americancatholic.org/Features/MardiGras/
I am not Catholic, but with Louisiana so close, one can not help but be caught up in a little of the celebration. So...I made gumbo yesterday and served it with rice and cornbread. Carol and Elton came over and she brought a delicious pan of lemon bars. They were to die for! Just melt in your mouth good.
At my last full-time job down near the Texas Gulf Coast, I met some wonderful people. I actually know three Cajuns. I worked with one of the men. His last name is Lancon. We Anglos pronounce it like it's spelled. However, the correct pronunciation in south Louisiana is 'la san' - or that's the way it sounded to me. Jerry said that he didn't learn English until he was five years old. He introduced me to one of the cookbooks he has at home. I "devoured" it and through some information found in the back was able to find where to order it and its companion cookbook. 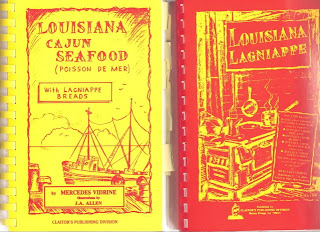 Sam's best friend, Ben, was born in southern Louisiana. Even though he is not of French Canadian or Cajun decent, he still grew up with the influence of the people and the food. His mother (step-mother actually) gave me a couple of the cookbooks she'd acquired over the years. She had reached the stage where she didn't do much cooking any more preferring to eat out. 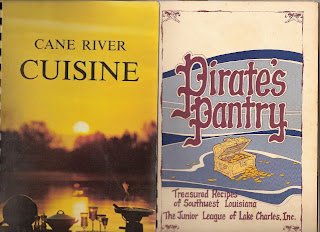 I have sticky notes everywhere in these books. I've cooked Gumbo, Crawfish Etouffee, Cajun Shrimp Sauce Piquante, Court Bouillion or Coubion, Stuffed Mushrooms. The list goes on and on. I have a recipe for Natchitoches meat pies that I just have tried yet although I have eaten the real thing in Natchitoches.
The thing about much of the Cajun cooking is that you take a recipe. Then you make it yours. Gumbo for instance. Even though you may start out with a recipe, you change it depending on what you have in your refrigerator. Or what the men bring in from a day of hunting and fishing - if you lived in the marsh land of the Louisiana coast.
This is my basic Gumbo recipe:
1 cup roux
2 quarts water
2 large onions, finely chopped
2 garlic cloves, finely chopped
1 cup green onion, chopped
1/4 cup fresh parsley, finely chopped
1 cup celery, chopped
2 bay leaves
salt to taste
pepper to taste
a bit of cayenne pepper if desired
meat and/or chicken, pork, sausage
seafood consisting of shrimp, oysters, whatever you desire
1 package sliced okra, if desired
Put 1 cup of roux in a big pot. Bring heat up to medium. Add remaining ingredients including meat (excluding shrimp and/or oysters). Cook for about 2 hours or until meat is tender and gumbo has thickened. In the last 15 to 20 minutes, add shrimp
and/or oysters along with the okra. You do not want to overcook your seafood or the okra. Seafood toughens, okra cooks away. You can even add a can of diced tomatoes if desired. After all, its YOUR Gumbo.
Let's talk Roux. Roux is a basis for many gravies. Its purpose is the deciding factor on how dark to cook it. A Roux is simple. It is merely equal parts of a fat (lard, bacon grease, vegetable oil, or butter) and flour. For white gravy, you cook it just a minute or two before pouring in your milk. For Cajun cooking, the time to cook your Roux may be an hour or two or sometimes three...with constant stirring. If you burn your Roux, you have to toss it and start all over.
I picked the brain of a Cajun restaurant owner in Freeport one evening and actually have in my possession his Crawfish Etouffee recipe ;o) . Imagine my amazement when he told me that he used store-bought Roux?! I was flabbergasted. He gave me the names of two or three store-bought Roux's (LOL what is the plural of Roux?!) The one that I can find in northeast Texas is Bootsie's. Look for it in a glass pint jar. The store here stocks it near the ketchup/catsup bottles. Um...I suggest looking for a product of Louisiana...I'm not certain I would want to cook Cajun with something in a bottle from overseas.
If you want to make your own roux, do a search. If you find Emeril Lagasse's name, you can bet he know what he's talking about!
Laizze le bon ton roule!
at 12:52 PM No comments:

I looked out the bathroom window last night. Grabbed my jacket and hollered at Sam on the way out the front door. He grabbed his jacket and followed me. Then he went back inside for his camera. 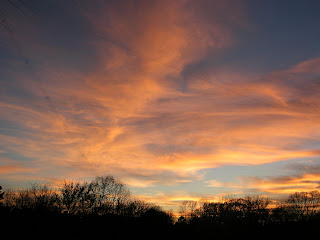 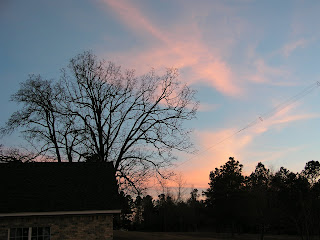 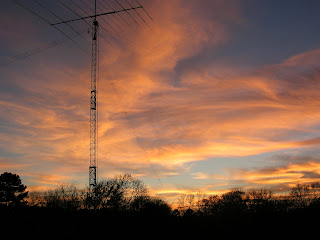 (Sam is a HAM radio operator - that explains the tower and various antennae.)
at 2:18 PM 2 comments:

LOOK at this! My pear trees are getting ready to bloom. The last time I looked, the buds were tight. When the trees look like snow, I'll post new photos. 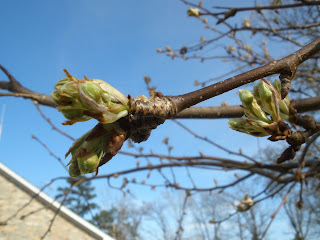 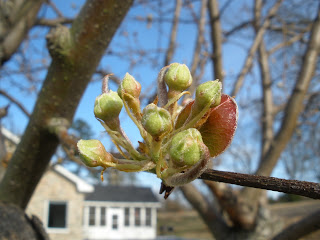 Had a ladies' weekend and thoroughly enjoyed it. Two friends did not get to make it: one because of a death in her extended family; the other because of her mother's illness. I can only imagine how much more fun it would've been had they been able to make it. Oh. Not really a "ladies' weekend." More of a high school graduating class weekend. 10 attended, but that's okay.


One of our classmates retired out of the Navy. He and his wife have a band and now perform in nightclubs in and around the extended area. Here's their blog:


Richard has always had a great voice. The addition of his wife, Chazz, jazzes things up! She can really work a room!


Anyway, some drove to Shreveport and back last night (er...early this morning). Some of us got motel rooms. That's what I did. Had my one drink (I can't hold my liquor and didn't want to have to go to the car to take a nap) and danced like nobody was looking! I love the line dances that are done now and as you know, am trying to learn some of them. Even though we didn't do country, just learning the steps helps with other line dances. There were more women in the lounge than men, we just all gathered on the dance floor and danced. You don't really need a partner, unless it's a slow dance. We had a couple of male classmates with us and they just danced in the middle. Sorta. We did a line dance sort of thing a time or two. I really enjoyed myself. Even though it doesn't appear that our dancing ability has improved much since high school...ALL those years ago!


I did make the statement this morning walking down the hall of the motel that if I did that on a weekly basis, I'd probably have to have a hip replacement! LOL


Before leaving, I made beef stew for supper Friday night. I loved the way it looked in the white bowls and grabbed my camera. Sam asked, "What are you doing?" Actually, I thought it was obvious. Camera in hand...evidently I was going to shoot a photo. ;o) When I explained that it was for my blog, he started to make a comment. "Just go sit down. Leave me alone. I'm taking the photo." 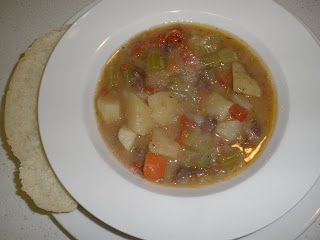 A bowl of beef stew with a slice of crusty French bread...delish!