Like many of you, I am so looking forward to the new movie Julie & Julia. The resurgence of interest in Julia Child is evident on television programming. Our local PBS station, LPB out of Louisiana, has been running reruns of some of Julia's shows. I grabbed pen and paper when this one came on. I didn't catch the name of the lady with Julia in her kitchen... 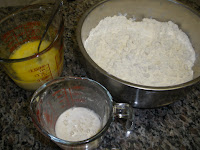 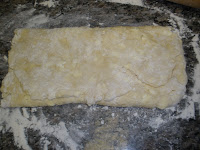 See those chunks of butter? That's the way it is supposed to look. 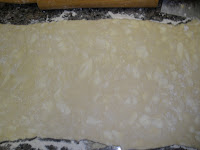 Once again, roll into rectangle. Fold by thirds into a square. Cut in half. Wrap with plastic wrap. Refrigerate for 30 minutes. Or At this point you can freeze the dough. My question is WHY?! 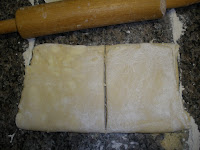 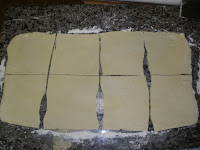 Put 1 heaping teaspoon (or more! I used a good tablespoonful) of filling in center. 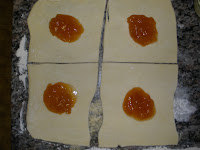 Brush edges with beaten egg white. Pull up corners, pinch and twist together.
Or
Cut through corners toward filling. Pull every other tip to the center. Looks like a pinwheel. 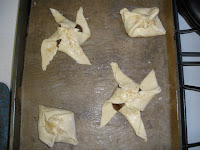 Or
Pull two opposite corners to center.
Or
Fold over in a triangle like a fried pie.

Brush all edges that meet with the egg white. 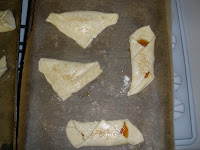 Place on parchment. Set 30 minutes to rise a bit. Brush with egg white. Sprinkle with pearl sugar. (Okay. They don't sell pearl sugar in Daingerfield. I found it online for nearly $5 a pound. So...I went to Brookshires looking for coarse sugar crystals. I found organic coarse sugar. That's what I bought. Never thought to go to the cake decorating section for those white sprinkles until after I had these in the oven.)

Aren't they soooo gorgeous?! These are prune... 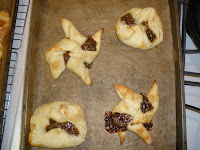 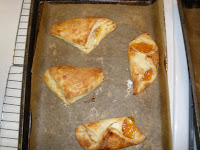 These have been drizzled with glaze... 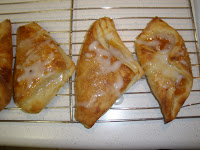 Glaze:
2-3 teaspoons water (recipe called for milk, but I had some glaze to sour one time ruining the bread pudding it covered)
½ cup powdered sugar
Whisk. Drizzle on pastries


These are plated and one is half eaten. OH MY GOODNESS! SOOOOO good. 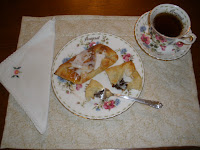 My birthday is tomorrow! In 2000, Daddy and Mama gave me this set for my birthday. Daddy himself handed me the cup and saucer stating that they were from him. I placed them in my China cabinet (in previous house) to admire. He died the end of October. One day I was sitting in the living room watching some inane something on television, I'm sure. I looked up and spotted the cup and saucer. Couldn't take my eyes off them. Then thought, WHY NOT? I finally had a cup o' tea in the cup Daddy gave me. I had been so afraid that if I used the set, it would eventually be broken. What's the use of having something and not using it? Save it for the son or grandkids to sell in an estate sale? Not me. I'm using my pretty stuff! 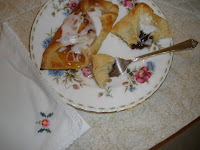 Including these gorgeous napkins. 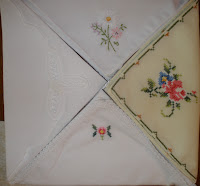 Martha over at http://linesfromlinderhof.blogspot.com/ has some beautiful vintage napkins. Mine aren't vintage and the napkin on the far left...the Battenburg lace doesn't show up. The other three are hand embroidered and hand finished. Mama was in the antique business for several years. Knowing that I use napkins on a daily basis, whenever she found some pretties, she purchased them then gave them to me.

As I mentioned, we use cloth napkins daily. They are about the only thing that I don't mind ironing. I have everyday napkins and special napkins. I have a set bandanas in assorted colors...they are great for barbeques! Except for the bbq napkins for obvious reasons, I do not gather up the napkins at the end of the meal to launder. Like Martha mentioned on her blog, we reuse them...not necessarily for a week, but for several meals. I try to be observant in case someone wipes their...so sorry...nose on their napkin...then that one is removed and replaced before the next meal. After a meal, the napkins are folded and left on the placemat. (I want to make certain I use MY napkin not one I overlooked handling the nose-wipe...)

Since my table seats 8 easily, most of my napkins are in sets of 8 or more. Two of the sets that Mama gave me have a dozen napkins. REALLY, nice!

I did not make the cream filling. Sam just wanted fruit. The cream is used to top the fruit...not for a stand alone filling.

The other half of the dough? She made this:

Take remaining pasty half. Dust with flour and roll out to 10 x 16" rectangle. Cut strip 1/3 into dough ¾" apart. Spread Berry jam down the middle. Top with cream filling. Brush fringe with beaten egg white. Cross fringe over middle like a braid. Brush with beaten egg white and sprinkle with pearl sugar. Let rise for 30 minutes.
Bake at 400 degrees for 15 minutes.

...without Sam. I had two days 'booked' so Sam decided to go visit his son. An overnighter.

Today I went by and stopped long enough to swap over to Mama's mini-van and off we drove to an out-of-town doctor's to pick up 'film' (x-rays) and report from her mylogram. Then on to the surgeon's office in another town...only to find when we got there that we should've been given about an inch worth of paper and film...not two sheets of film. The office contacted the initial hospital to fax what they could and also to mail the rest of the film. eye-roll...sheesh.

Long story short...nothing short of another surgery will help her back. She's not willing to do that at this time. She's already had two laminectomys (however it's spelled but that's how it sounds) and the last surgery fussed four veterbrae in her lumbar area. The new problem is just above the screws and plates.

Tomorrow I had a library meeting to attend, but now find out that the trip has been cancelled. So...a-shopping I go.


Off to do some more piecing on my quilt. Oh! I have a photo. I've made 15 blocks...two more to go. This is from a twin-full size quilt pattern. And I have not done the math to enlarge it...so I'm just making blocks and pieces as I need them. ;o) 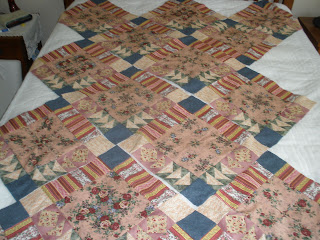 Somewhere before this, I posted about several of my loves including but not limited to...
Sean Connery
Tom Selleck
Sam Elliot
http://keepyouinstitches.blogspot.com/2009/06/i-got-to-thinking.html

I've decided that I will probably never marry again. Sam is #2. He's 17 1/2 years older than me. I think that if a husband 7 years older dies, and then I have no more sense than to marry someone almost a generation older than me...I need to call it quits with 2.

That is...unless...I get to meet Sean, Tom, or Sam in person. Any of the three would be just fine thank you very much!

What can be better than that...other than another batch of those delicious Oatmeal Raisin Cookies?! I baked them three or so days ago...let's see...Last Wednesday. There's not but 3 left and I feel that I have to leave them for Sam. Sigh. Sacrifice.
http://keepyouinstitches.blogspot.com/2009/06/cookie-day.html
at 9:53 PM 5 comments:

That's what Sam hollered when he came in the house about 11:30 a.m. today. I jumped when he stuck his head in my sewing room door where I was working diligently piecing my new quilt.

I helped him earlier this morning on the final plumbing. When I got in the house I was almost as filthy as I was when I was a kid making mudpies. Even though the dirt hadn't had water added to it, the sweat on my body did a good job. I was coated with mud. (I was down in the ditch while he operated the tractor...what's wrong with this picture?)

Here's everthing covered up and smoothed out. He still has to do a bit more leveling, then top with topsoil. I asked if he going to landscape? He thought I was serious, so answered seriously. Nope. He doesn't want anything that he has to trim around. He purchased the toilet paper holder, towel bar and ring. It's a good thing he got what he wanted from Lowes. I would'a never thought of buying something there. While even though inexpensive compared to some of their other fixtures, I was going to make a stop by the dollar store and buy cheapo. LOL That's probably exactly why he got them. (Hmmm...no photo of the toilet paper holder. It's made like the towel ring so no roller with the spring in the middle to hit the floor.) 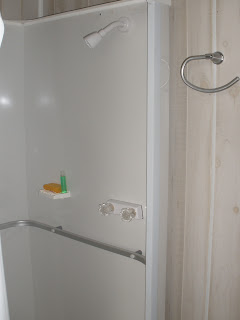 I stocked the cabinet over the commode with a towel, a change of clothes, and some toilet cleaner...like that'll ever happen. Well, it probably will if I do the cleaning. I remembered the toilet brush and plunger too. Sam put the toilet paper in the cabinet. ;o) 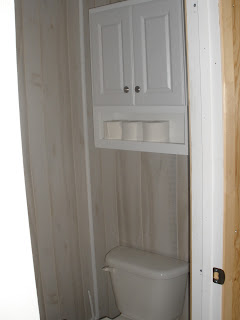 See the mirror over the sink? It looks like a window, but that's a reflection. Would you believe that he complained about the old towel? It looks better in the photo than up close. You can see the holes and the ragged edges. ;o) I told him that I could do better for him. I'll make a raid in the camper and do a bit of rotating with older towels in the house. 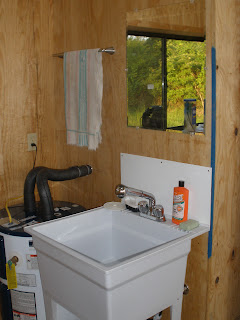 We made a special stop by Lowes today for the sign. He thought it would be fun. I told him that it was false advertising. It says, "Restrooms." There ain't but one. 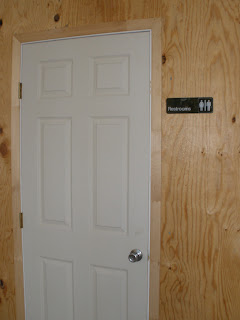 Sam wanted to go celebrate so we went to Longview and ate at Olive Garden. "I" have leftovers!
at 7:52 PM 1 comment: