Grandson and the Last Loaf of Bread 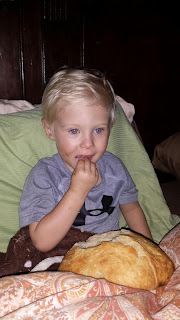 I received this via text message Sunday night. :D
at 8:10 PM No comments:

I was sitting beside Sam on the couch the other day. His phone rang. Sam is a bit hard of hearing so he has the volume on the phone turned up pretty high. Even though I was on his right...and he was holding the phone to his left ear...I could hear Erin telling him that something came up and their babysitter had to cancel Saturday night. I just about got whiplash nodding my head...TELL HER YES!
They are a couple of hours away...but how can you say no to these two? The little blond has the face of an angel...the little brunette makes no such claims. 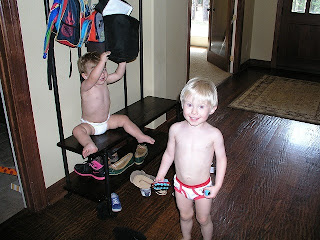 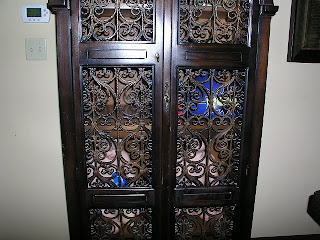 Sssh...don't tell her my secrets. ;-)
We had supper...chicken brat (singular because I cooked only one for the kids to share...Sam and I don't care for chicken sausage), mac n cheese, steamed broccoli. Then Sam settled in for the NASCAR race. At one point he said, "I can't hear a thing."
So I said, "Boys, let's go for a walk." I received many instructions and probably forgot most of them. However, I did not forget, "If you go outside, do not let them wear their new shoes." I got Colt outfitted with a matching pair of old shoes. Every time I found a shoe and reached for its mate, I had to dig behind the hall bench where Cain was throwing them. I finally got a right foot shoe and a left foot shoe. They were not mates, but they were the same size. I do not know who they belonged to, but I put them on Cain's feet. :-)
(As you can see...we really got dressed up for our walk. The joys of country living!)
Colt immediately showed off his climbing skills. 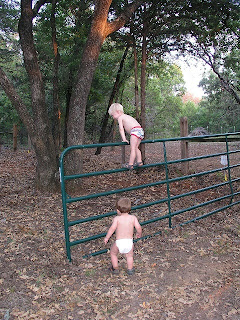 Thank goodness he scurried down before Cain could prove to me that he was just as talented.
Ready. Set. GO! 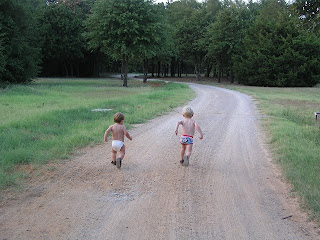 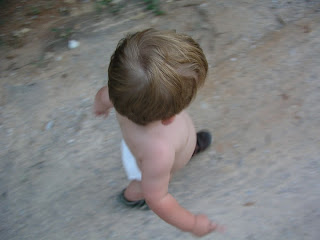 Sunday morning we baked bread.
Able hands all around for the kneading... 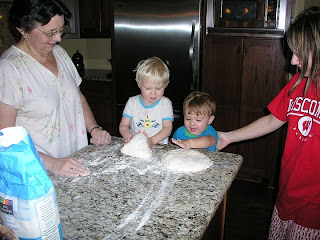 ...and the Quality Control duo taking care of the tasting.
"Cain, do you think it has enough salt?" 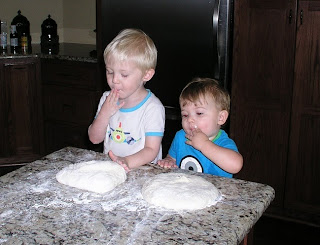 "I dunno, Colt. Let me get another taste."
The finished product received rave reviews. 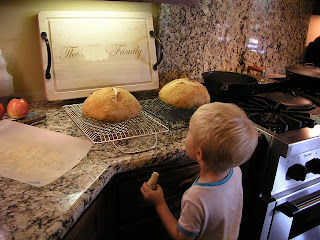 Note: On occasion, I am surprised at how good one of my photographs turns out. Like this one.
Pawpaw playing with Isabel. 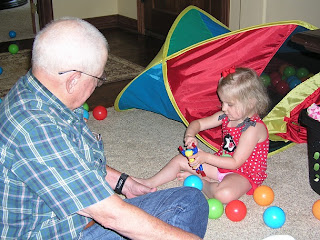 Siblings Brook and John were standing in the kitchen. I snapped a photo. I motioned Sam to join them and snapped that photo. One of John's friends sidled up beside me. I handed him the camera and he snapped this one. 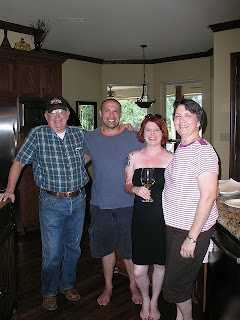 Missing Jonathan in this one...hopefully next time. (He works weekends...bummer.)