I just got back from visiting My Messy Thrilling Life. Brin, poor dear woke with with half of her peanut butter and honey sandwich under her face and the other half smeared down her coat. LOL How many of us have fallen asleep and woke in a mess or in an embarrassing situation. I'm waving my hand in the air and can't believe I'm about to tell you all.
Sam and I were married 11 years on July 19 this year. Back when he was courting me from 320 miles away, we spent quite a bit of time on the telephone - long distance. Our phone bills combined went into the hundreds of dollars...I kid you not. I, however, was the smarter (cheaper) of the two. I would call in the morning before he headed off to work to wish him a good day. He called at night and the marathon conversations would be on his nickel...hahaha...if only!
One night, he was whispering sweet nothings in my ear. All of a sudden I hear, "Sherry. Sherry!" Woke me up from a sound sleep. I was so mortified. We air-kissed good night on that one. (The photo is us pulling KP duty Thanksgiving two years ago at his daughter's.)
Changing gears...I found an audio cassette labeled, "Jonathan." I've been sitting here 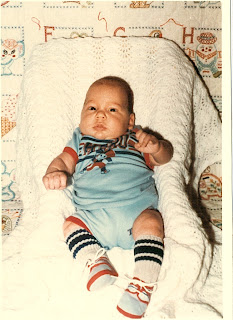 listening as I type and realized that I had stopped typing while listening and had a tear sliding down my cheek. Apparently one day, his daddy and I heard him cooing and starting taping him. I continued for several months catching him in heart rending infant sobs...even now, nearly 25 years later, I wanted to run in, pick him up, and let that crying baby nurse. (Sorry Jonathan, you shoulda skipped that part.)
As he got older, he and I even sang together...The Lord is my shepherd, I'll walk with Him always. Always, always, I'll walk with Him always. Jonathan just kicked in on the always part, but he did participate.
Jonathan, I know you check in here every other day or so. Remind me to play this for you next time you're here...I know you probably don't have a cassette player. Your daddy's voice is on the end...just a few words...
For those of you who don't know me that well, Jonathan's dad (Ron) died in 1996...right after our 25th anniversary and a month and a half before Jonathan's 13th birthday. It was hard. God took care of us.
at 8:49 PM 2 comments: