I've been telling stories 'out of school' on another blog, Kar's Down Home Bliss (look in my sidebar). She started it by mentioning that her daughter eats butter like Karin's dad did. So, I told a story on my older brother.

My lucky mother had three children - stair steps - before she was 20. I was born in the middle of those three, but being the only girl, I am proud to say that I do NOT have middle-child syndrome.
February 1952 - Leslie (we called him Junior, but he's not a true Jr.)
August 1953 - moi
December 1954 - Billy (now called BJ because his son is a Billy but not a Jr.)
Every time we did something was when Mama was outside hanging clothes out on the line to dry. We were 'in bed taking a nap.' Bwahahaha! So she thought!
One day she walked in and Junior was in the kitchen, obviously very awake. The stick of butter on the table was gone. She looked at him. He burped. The butter rolled up and out of his mouth. ;o) 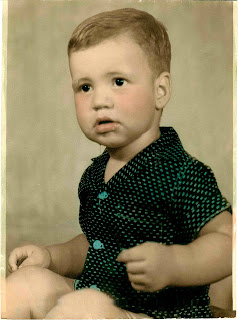 Then I made the comment - You don't want to know what I did while Mama was hanging out clothes. Yes, Kar and her visitors did want to know the truth, the whole truth and nothing but the truth. So...
I was in bed taking my nap. Bwahahaha. When Mama came back in the house she found me wide awake. Sitting in the middle of the old wood kitchen table that had seen better days. In other words, the finish was just about gone if it ever had a finish. I had emptied the box of Niagara starch. She said it was the pink flakey stuff that you mixed with cold water...not the white powdery starch you had to cook. I had played in the starch smearing it on the table. That would've been a bad enough mess to clean up, but...I peed.
Notice year of birth? Before disposable diapers. Rubber pants were hard to come by. Mama said that the mothers nearly killed for a dry cleaners bag to cut up and pin over diapers.
So...I'm playing finger painting with starch wet with pee. ;o) Since she had to clean me up first, the starch was well on it's way to drying and hardening by the time she got to it. Mama said she never got all the starch out of the cracks and crevasses. I'm sure she bleached it a couple of times...and we continued to eat off said starched and peed on table. 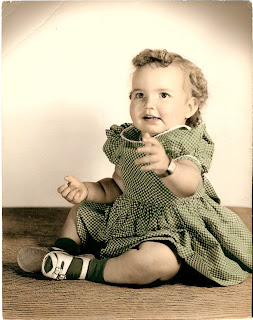 BJ...You know. She didn't really tell any stories on him. Perhaps there's just too many! I'll have to talk to her some more. 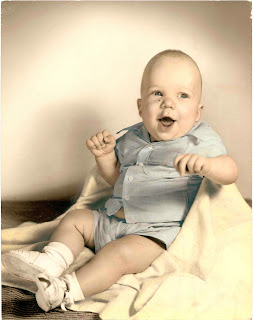 Back to Junior...You know how kids like to help. She pulled a chair up to the sink for him to stand on while he 'washed dishes.' Beats me why she left the room...could've been BJ was into something. Not me. I was a perfect child. whistle whistle whistle Starch? What starch? When she returned to the room, Junior was sitting on the cabinet with his feet in the sink. 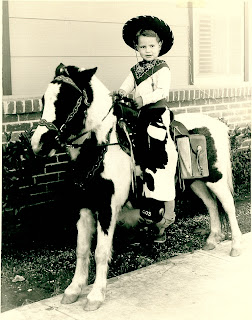 Junior got his picture taken on the horse so did I. Ain't I just so cute? (See the guy's feet under the horse?) 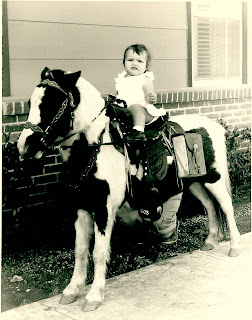 I got my photo taken twice on a pony! 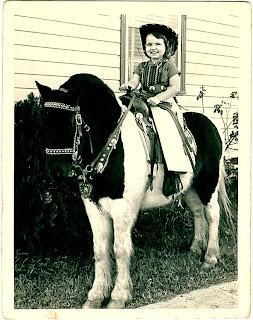 Here's Mama and Daddy back then. 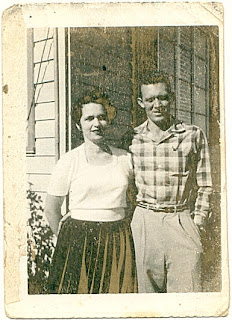 Fourth child was born September 1964. There's already a photo of him on the blog someplace. He put rocks and gravel in my gas tank when he was four. I'd just as soon not talk about him right now.
at 5:15 PM 3 comments: 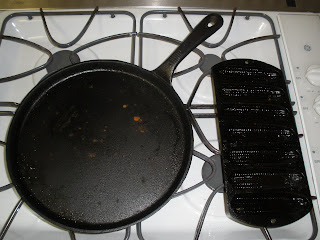 It's been so hot and dry the last couple of years. My neighbor stopped watering her fig bush and it's too far away from our house unless we run 300 feet or more of water hose for us to water it. BUT, another friend remembered me! 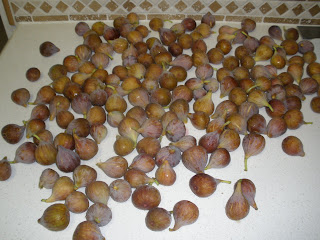 Mama has made some preserves in her crockpot so I started in mine. Well...mine doesn't boil, so I had to revert to a pot. But they had been in the crockpot long enough, that I only had to stir and watch them close for about 30 minutes. 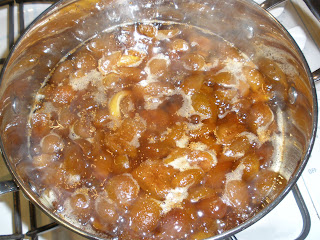 I got 8 pints and 3 half pints. Not bad! I'll have to make biscuits in the morning. 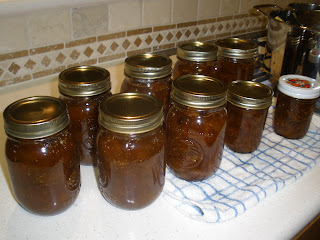 How about this sooo hard recipe?

Select only perfect figs, ripe but not soft. Wash. Slice in half if they are large. Place alternate layers of sugar and figs in an enamel or stainless steel kettle. Let stand overnight in refrigerator. Add juice of one lemon. Cook over medium to low heat. Bring to a boil. Cook until tender, transparent, and amber colored (about 1 to 1 1/2 hours); stirring often to keep from sticking and scorching. Fill hot, dry, sterilized jars to 1/2 inch from the top. Close and seal.

Note: The first time a friend of mine made fig preserves, she peeled her figs. Please don't. ;o)

I cooked the ripest figs yesterday. The rest today. I started them in the crockpot and cooked in it for about 6 hours on high. If your crockpot will boil, remove the lid and boil down. If it's like mine and won't boil, pour into a pot, bring to a boil, and cook until thick enough to suit you. I didn't have to cook mine but about 30 minutes longer.
at 8:33 PM 3 comments:

Another Movie and Another Giveaway

Heather at the Tarnished Tatter has a mystery giveaway. Click on her button below the Friends cookbook button on the sidebar.

I went to the movie theatre again last night and had another Coke. But I was so sleepy from the sleep I missed the night before that I had no problem falling out at 10 p.m. when Sam went to bed. Carol didn't make it to the movie Tuesday night, but called yesterday. So...I saw The Proposal again. It is really THAT cute! Sandra Bullock showed some nakedness, but she covered her vitals. Also a couple of sexual inuendos, but I don't remember any 4-letter words...well, maybe one or two but not the nasty vulgar stuff. Don't take the kids, but go!
at 11:37 AM 3 comments:

I had a coke along with popcorn at the movies tonight. Since I don't normally drink caffeine to start with, those near weekly movie nights keep me awake past midnight. 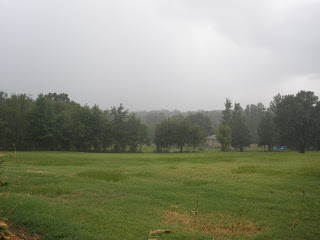 And guess who left the camper door open? During a break in the rain, I went up with a mop, but nothing was wet. 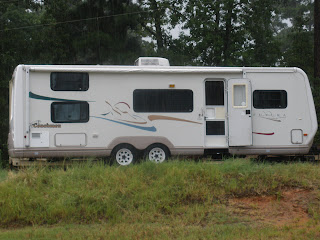 Sam got the plumbing stubbed out and the ceiling and walls up in his potty room. 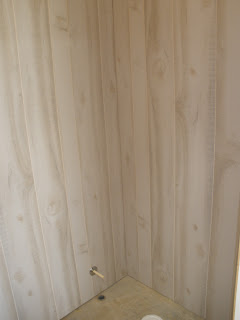 After he puts the corner moldings in, he'll move the shower surround in and secure it in place. 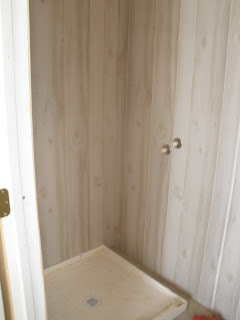 And the door is installed along with the door facings. The utility tub is plumbed and the plumbing is stubbed out for the hot water heater too. 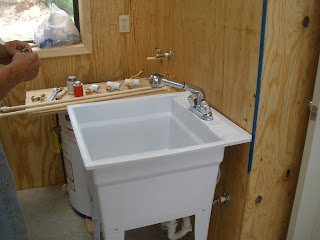 Go see it! Several men were in the theatre and laughed the loudest.
at 9:24 PM No comments:

We have been blessed with a chance of rain from Saturday through Thursday. Of course, 20% chance of rain means 80% of no rain. But today. RAIN! Glorious...blessed...RAIN. Temperature is about 75 degrees. Areas around us are getting more rain, but I am extremely happy for what we are getting.

I made salsa yesterday. Last year's batch came out okay, but I really had to tweek the recipe as I went along. Waaay too much vinegar which required waaay too much sugar.

I found a Pace Picante sauce knock-off recipe. It was made with canned tomato sauce. I added fresh tomatoes from Mama's garden. This should be enough for Mama and us. With a jar or two for giveaways.

Bring all ingredients to a boil in large pot over medium-high heat. Reduce heat and simmer for 30 minutes or longer until thick. I don't like sweet salsa. I save my sugar for desserts. ;o) Remove from heat. Pack into jars and process in boiling water bath for 30 minutes.

Oh! My goodness. This is soooo good. 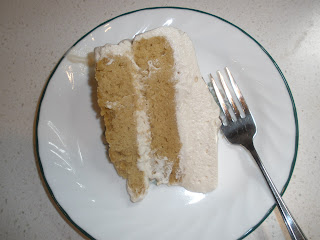 Sam and I celebrated our 12th anniversary yesterday, Sunday July 19. Carol and Elton joined us. We ate at Lamache's in Jefferson Texas. Delicious Italian restaurant in one of the hotels...One of the haunted hotels. Stories abound about ghostly visits in several of the rooms and kitchen noises going on in the kitchen...when it's closed. Upon investigation...nothing.

I read about Bailey's Irish Cream Cake. With a bit of searching on the internet trying to find a recipe that didn't call for a cake mix, I found this:

Preheat oven to 350 degrees. Grease, line the bottoms of 2 round cake pans with wax paper or parchment, grease and flour pans. Combine dry ingredients, set aside. In a small saucepan over medium heat, combine Bailey's and the butter; heat until butter melts and mixture almost boils. Remove from heat, stir in vanilla. Cover to keep warm. In a mixer bowl at high speed, beat eggs until pale yellow and tripled in volume (5 minutes or so). Reduce speed to medium; beat in sugar 2 tablespoons at a time, until combined. Reduce speed to low. In a thin steady stream, beat hot Bailey's mixture into egg mixture just until combined. Beat in flour mixture until just combined. Divide batter between pans. Bake 20 minutes or until toothpick comes out clean. Cool in pans on racks 10 minutes; remove layers from pans and continue to cool on racks.

Icing:
Combine all ingredients in mixer bowl. Beat at high speed until stiff peaks form (3-5 minutes). Refrigerate frosting until ready to use. Assemble cake. Garnish with chocolate pieces if desired.

Assembled ingredients. The clerk in the liquor store tried to get me to purchase a cheaper Irish cream. Sam has mentioned Bailey's before and since he likes it, that's what I bought. You know, the clerk never heard the phrase, "Don't cook with anything that you wouldn't drink." I took a sip of the BIC. No thank you. I intended to keep the secret ingredient secret, but Sam walked through. This is the first time we've had this in the house since we've been married. He had to have a snort. 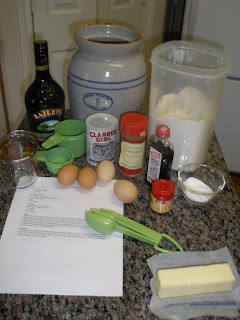 The three different bowls ready to be assembled. 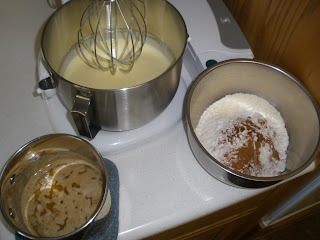 Drizzling the Bailey's and butter mixture into the whipped eggs and sugar mixture. 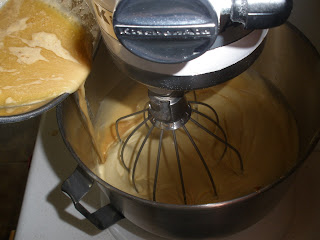 Flour mixture blended in. Then poured into the two pans...ready for the oven. 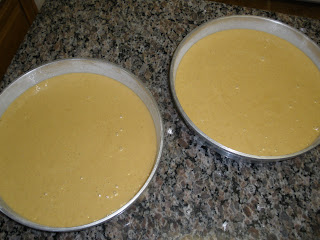 Cooling and waiting to be slathered with whipped cream. 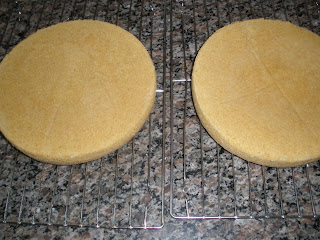 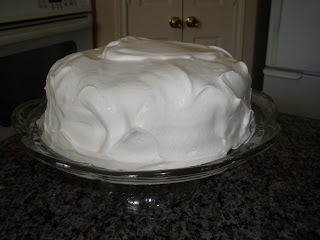 This was a dense cake. It may be the way it is, but there's a possibility that the beating time may have been too long. I remember reading somewhere that once you've incorporated all the air into a mixture that it can take, you then start breaking bubbles. Another possibility is that my baking powder may be old...but it was okay last week when I made cornbread...

And, the whipping cream between the layers squished out when I sliced the cake. I might substitute a butter and powdered sugar icing thinned with Bailey's Irish Cream next time.

Well, next time I intend to try the chocolate version. ;o)