Not much going on around here. I've been setting my Kindle to Text to Speech and listening to it while I sit in front of the quilting frame working on a poor red-headed step-child quilt that's been in the frame ever since I started work - TWO YEARS ago! Hmmm...I don't seem to have a full view photo of it. You'll have to wait until I finish the vine and roll the quilt to the next section. 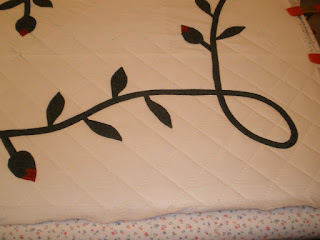 It's a Rose of Sharon variation. Originally I was going to call it Sherry's Rose, but since Mama's death last March I've decided to name it Shirley's Rose.

I purchased the Outlander series (by Diana Gabaldon) for my Kindle. (Thanks Cody, Brook, and Isabel for the Amazon gift card for Christmas!) I'm reading/listening to it AGAIN! I've lost track of the number of times I've read it or listened to it on audio book from the library. And am anxiously awaiting the next book...Written in My Own Heart's Blood to be released Fall 2013!!! :D

I baked oatmeal-raisin cookies for Sam yesterday afternoon. He kinda got his nose out of joint about the spicy chocolate tart I made. When I offered him a slice of it, he commented Yes, I'd like some oatmeal cookies. eyeroll Men are truly just little boys in grown-up disguises.

The last time I baked the cookies, I pulled the recipe off the internet. It's Quakers Vanishing Oatmeal Cookies. I thought something was different. It called for 3/4 cup brown sugar and 1 stick and 6 tablespoons butter. Hmmm...I didn't remember that. The cookies were different. They were thicker and more cake-like. Later, I found the "original" recipe in my binder. Well HELLOOOO! Quaker changed the recipe and did not call it "Vanishing Oatmeal Cookies - less sugar - less fat."

I made this batch by the original recipe. Just like we remembered they should be. Perfect!

Just remember to use 2 sticks of butter a full cup of brown sugar. (I searched the site trying to find the REAL recipe - it's not there!)

John texted to tell me that one morning Colt was singing: Pawpaw Pawpaw Pawpaw Genie Genie Genie Donnie Donnie Donnie...over and over again. Colt can't pronounce Granny yet. Donnie and his wife are friends of John's and Erin's. Sam was visiting with John later in the week. The guys, including Donnie, went to lunch together. That was the first Donnie had heard about the song. Sam said he grinned.

Well - that's about it! Just the "normals" around here. Work - which I love! Work around the house - a necessary evil. Wishing my grands were closer.
at 8:52 AM 2 comments: