I subbed at high school every day this week except for Monday. Because of slipping on the ice on Sunday, I told the secretary that I couldn't go down to the fifth and sixth wing and explained why. I had three very light days. ;o) Friday was full, but I still didn't do any harm to my leg.

Oh, my! That heating pad still feels so good wrapped around my left calf and foot. What little swelling there was is now gone. Just feels a bit achy at times. Other than that...I could run a mile...if I really, really wanted to. Well...not really run a mile, but I could walk it rather fast. ;o)

Thursday, I subbed next door to the home ec kitchen. I had a brownie and a slice of chicken pot pie. Those kids did a great job. Funny thing...I've been trying to make chicken pot pies all week. I have not cooked one meal at home. The chicken HAD to be worked up. (It was fully cooked and frozen. I put it in the refrigerator to thaw, so at least it hadn't been refrigerator temperature all week.)

So...I had chicken pot pie for lunch AND supper! Now how often does that happen in real life? 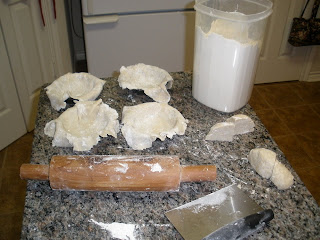 This is the last photo because I forgot to take one of the fully cooked pies. Even the bottom crust was flakey and crispy! Lard!! I rolled out the cut-off dough into a rectangle. Buttered it and sprinkled with cinnamon sugar. Rolled like for cinnamon rolls and cut in 1" pieces. Baked those. Sam (me too) eats them as if they were good. Well...they are. 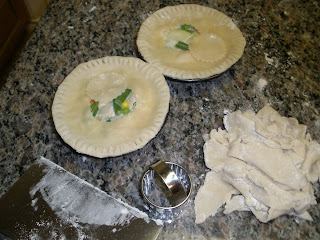 A friend, THANKS NANCY!, gifted me with a cast iron cornstick pan. She has not used it in years because she had to scoop the cooked sticks out with a spoon...they stuck. 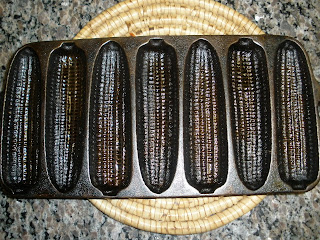 My guess is she just didn't put in enough bacon grease, LARD ;o), Crisco, or oil. I'm going to give it a try today. I cleaned it - didn't need much cleaning - smeared it with LARD and put it in the oven after I got the pot pies out.

It's a Wagner. Good USA brand. 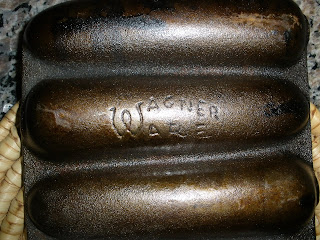 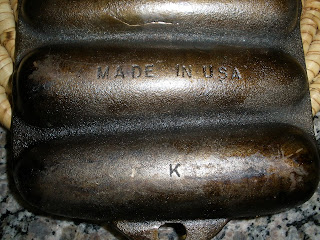 Once upon a time in a land far, far away... ;o) Sometimes it feels like that.
We don't get snow or ice very often in my corner of Texas. I generally say something like once every five to ten years. When it snows, we get wet snow. Not that dry stuff they call powder at the ski resorts. As long as the temp stays below freezing, we do pretty good. BUT the temperature does NOT stay below freezing the second day. Then when the temperatures drop below freezing at night, we get black ice on the roads and white ice in the yard.
Hard, white ice. I have fallen several times. Seems that the first one was before Jonathan. We had horses (and dogs - mostly redbone coon hounds) that had to be fed. I carefully skated out to the storage building and filled the buckets. Gingerly stepped out of the storage building, went behind to the stalls and fed both horses. I'm smiling. Too soon. As I round the corner of the building to put the buckets away, I slipped. Which would've been bad enough, but I banged into a 'pry bar' Ron had stabbed into the ground. It was as firmly in place as if it had been cemented in the ground. Not one bit of give. Oh...a pry bar is a piece of solid steel. You can comfortably wrap your hand around it. The other end has been flattened into a wedge-shape. Truck drivers who work in the oil field industry use it to pry or break loose the pipe loaded on their trailers to start it rolling off the trailer and onto the racks.
Back to the story. The bruise! OMGosh! The side of my thigh was bruised from hip to knee. I thought I was dying! Needless to say, Ron was told about the pry bar being in the wrong place and it was removed. ASAP
December 1983. I believe we set a record that year. Twenty or more days that the temperature never got above freezing. I went into labor during that time. A normal 40-45 minute trip took about four hours because of the black ice on the roads. I did not fall that year. Ron would not let me out of the house unless he had a grip on my arm. He walked me from the house to the car...from the car to the office...and back.
Another time, the rural mailman pulled up in the yard and beeped his horn. He had a package that wouldn't fit in the mailbox. If I remember correctly, Jonathan was a baby or really small child at this time. I carefully walked out the back door and maneuvered the steps. Skated across the yard and just as I put my hand on the front fender of his car, down I went. I heard his car door open and shouted, "NO! Don't get out. There's no reason for both of us to hit the ground." I pulled myself up, got the mail, and skated back to the house. No damage that time.
While we were gone this past weekend, I was in the mall in Sherman Texas...poor pathetic mall. Didn't have much going for it. Anyway, Baby Brother Joey (once upon a time known as The Brat), called to tell me that he heard that Sean Connery had been voted one of the sexiest men alive.

Well DUH!
This is the first cookbook I had the privilege to work on. 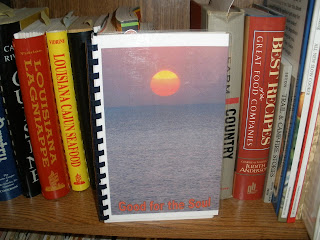 Good for the Soul was compiled while I worked at U. S. Contractors in Clute Texas. Proceeds were for a charitable reason that I've forgotten now. I contacted the employees...in the main building, outlaying buildings, and the field...for recipes. They were typed, proofed, and bound at the office. The title was selected because not only was the food good for the soul, but blank spaces were filled in with Bible verses and hymns. (Family owned company...VERY GOOD people!)
We had such good cooks! Several employees in the main office had a Friday morning breakfast club. We rotated providing breakfast for the group; ie, four or five of us would cook for everyone this Friday...another four/five the next Friday...etc. This cookbook contains many of our favorite recipes.
at 10:27 PM No comments:

I Almost Hurt Myself...

Yeppers. I took a fall. My right foot landed on a patch of ice Sunday night. In the dark. Outside all by myself. No really close neighbors. We were visiting and I was 'home alone.' Their water had been frozen but as I walked in the house, I heard water running...turned the faucet off in the bathroom and checked inside the house. Everything was dry. As I brought our bags in, I noticed what I thought was water running across the yard...went back out to check. No water running and dummy me not thinking about the temperature hovering around 30 degrees...walked across the yard. As soon as the foot touched the stepping stone...down I went.
Unlike the above photo I snitched from the internet, both of my feet were not in front of me. Imagine my panic in those few seconds when I realized my left leg was folded behind and under me and not following the momentum of my body. I slightly rolled my body to the right and thank God, got the foot moving.
I was able to hobble into the house, pulled off my jeans and took stock of the situation. Getting in the house hurt like heck, but I could put my weight down on my leg with no excruciating pain. No immediate bruising (and it never did bruise). As I mentioned, I could put my entire weight on my leg with not much pain and could move it. But walking on it...I detected rather quickly it was a muscle problem. After finding no bulging muscle and just seeing a slight swelling, I decided it was a sprain.
Boy hidee am I sore! I pulled the calf muscle and since the foot was trying to bend the wrong way, the top of my foot... I sat with an ice pack the rest of the evening...and started all over again Monday morning.
Sam and I went for lunch in the middle of the day and I was holding his hand for support. I finally had to tell him to quit trying to pull me along. LOL Rushing me was NOT helping the situation! He's used to me walking faster...he strolls along.
Yesterday evening we arrived at home. I located the heating pad. Ah!!!!! Felt so good.
I subbed today. I told the secretary that I couldn't walk down the ramps to the lower wings but if it was on the main level that I could do it. I was achy when I got home this afternoon. But better than I expected.
The weather is milder...temps above freezing with a rain coming in Thursday and Friday. But some time next week the cold is supposed to hit again.
Cherry! Where is a good halfway point? I'm afraid it will be somewhere in the middle of the ocean!!
at 8:08 PM 3 comments: