I love Feedjit. Scroll down and you'll find it on the right side of my blog. It tracks where your visitors are from or at least near because when I check in, I'm always from someplace else...I think because we have satellite hookup... It also tells where they clicked from...like HGTV or a link on the local newspaper or via a search or even direct.

Eighteen hours ago, someone in Holy See, Vatican State, did a search for Jambalaya, crawfish pie, me oh my oh...or something like that. And they hit on MY blog! Took them straight to a jambalaya recipe I posted.

Yep. June 1 has been a holiday. Actually, since I've returned from Arkansas I've been on holiday. We rode our Harley's to Paris Saturday for servicing...mine got its 1,000 service at 1,400+ and Sam's got its 15,000 mile service...remember his is almost 2 years older than mine. I doubt very seriously that I'll have that many miles on mine in 2 years though. 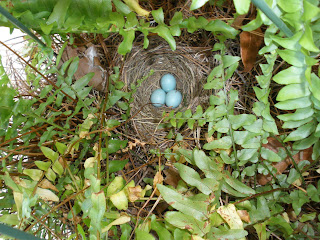 When I opened the front door this morning, a bird flew out of the hanging fern. Birds have laid eggs in the old nest in the hanging fern (it had four or five babies in it early this spring. That poor plant may not survive if it doesn't get to the point where I can fertilize and water it in a consistent manner!
I tried to cut out a pair of scrub pants for Jonathan...half yard too little fabric. 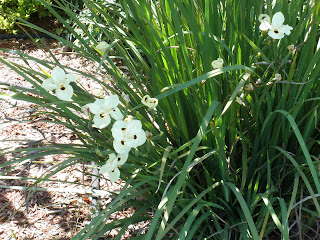 The last top I made him had palm trees on it. His girlfriend liked the fabric and I have enough left over to cut a back and the "skirt" part of the front. Unfortunately, I didn't have enough of a piece of solid yellow to cut the bodice and sleeves...well, not enough to cut even one of those out. I'll be taking Mama to the doctor Wednesday for a checkup so will drop by Hobby Lobby and/or Hancock's to see what I can find. 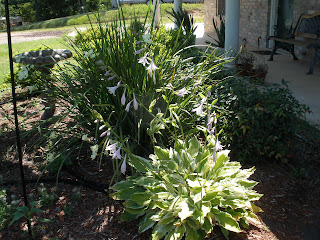 I took a few photos of flowers today. Thank
goodness I've planted things that can pretty much take care of themselves 'cause I sure haven't been doing anything for them this year!
My deitz lillies are still blooming and all three hostas are blooming. 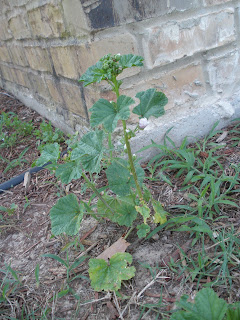 The French hollihocks survived the weedeating! Carol (who gave me my start originally) asked me about them. We found a few outside the flower bed and a few inside. I pointed her to some throw-away flower pots and the trowel so that she could dig some up and take home. I prowled around a bit and found a stash of seeds too.
Remember all those beautiful bluebonnets? They are pretty scraggly now. 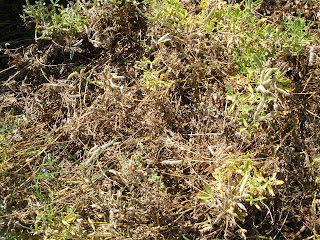 They can't be mown down until the seed pods have completely dried. There's a pretty bad weedy looking mess down by the road, but Sam hasn't complained about them (at least not in my hearing). I certainly don't like how they look. I talked with Carol about planting some other type of wildflower seeds in the same area that would be blooming next year while the bluebonnets are drying out...coreopsis maybe... 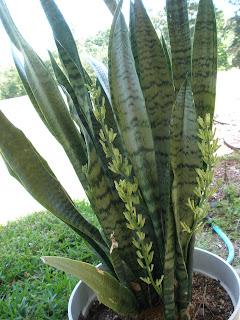 Hopefully this year I can catch my mother-in-law's tongue/snake plant/sansaveria when it actually blooms. I recently divided them and shared with the ag department at school. Actually, I gave the head of the department a whole potfull and half of the other one. This is the second time since moving back home in 2004 that I've divided them. They multiply very quickly filling the pot in no time.
Sam and Elton started on our metal building today. Foundations for ours and Elton's were poured back in November. After the first of the year, they erected the red iron (framing) on Elton's. Then, having to wait for time when the wind wasn't blowing, they eventually were able to put up the wall insulation and the metal sheeting. The roof was put up by a hired crew one weekend. Sam, Elton, and Carol installed the windows.
Now, here's ours going up: 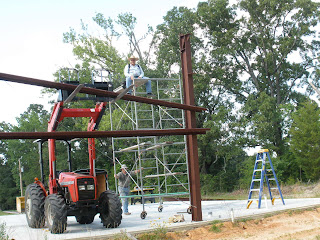 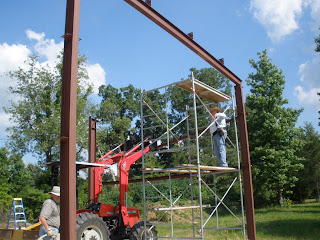 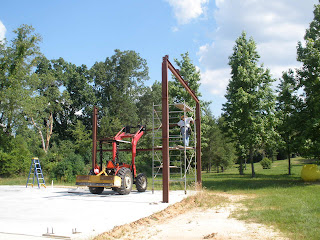 They didn't get started until after lunch and worked a couple hours more after these photos. Carol and I grilled steaks and squash for supper. Finished it off with a Sara Lee pound cake topped with strawberries. I meant to bake a pound cake this morning...but forgot. :o(
at 9:15 PM 1 comment: