Praise God from Whom all blessings flow.

Praise Him all creatures here below.
Praise Him above ye heavenly hosts.
Praise Father, Son, and Holy Ghost.
Amen.

Let's see...how did these photos load?

AH! As Cookie Monster says, COOOKKKKIIIEEEEEEE. Cookie Cookie Cookie! That's good enough for me! I made more of Sam's favorite oatmeal cookies. It's got to where he asks for these more often than his beloved apricot fried pies...probably because he knows he's more likely to get the cookies! Recipe is here: http://keepyouinstitches.blogspot.com/2008/11/happy-thanksgiving.html 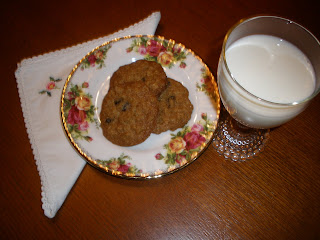 And truffles! I made these last year for the first time. OH! MY! GOODNESS!!! And I do mean GOOD! These two photos of the cookies and truffles are from previous cooking episodes. I was too busy eating to take photos! ;o) Here's the truffle recipe: http://keepyouinstitches.blogspot.com/2008/12/scrubs-and-chocolate.html 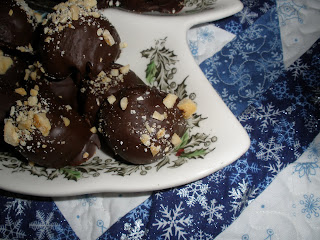 Daddy and Mama had the first three of us in stair-step fashion. We were born less than 2 years apart. Older brother Leslie, even though he wasn't a true junior...we called him Junior...was born February 1952. I was born August 1953. Billy (aka Billy Joe when he started school and had another Billy in the class; and BJ which is his adult name) was born December 1954. Ten years later Joey (aka the Brat) was born...but he's not part of this story. I have had serious trouble with the other two within this last decade. To the point that I did not speak to them for four or five years. Fences have been mended. We have eased ourselves back into each other's lives.

The other day, Mama told me that BJ is going to be baptized in the next week or two. I called him tonight to #1 invite him for Thanksgiving (he's divorced), but he already had plans and #2 to ask him if he needed a new Bible...he has a fairly new one. I told him I wanted to come to the baptism...he said he'd let me know when. We talked a while. As we wound up our conversation, he said, "I love you Sis." I love you too. 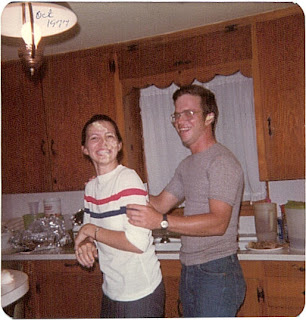 I hate to tell you when this was taken...during the time of our favorite grandmother's funeral. BJ was sitting at the bar at Daddy and Mama's shoveling food in his mouth. I walked up behind him and fully intended to push his face in his plate...I mean, I only had to push about an inch 'cause he was that close to his plate. Well, he turned his head at the last minute to see what was going on...hence the potatoes in his ear. Oh? The potatoes in my face? Well...he grabbed a handful out of his plate and washed my face with them. Mama (and the grandmother was her mother) grabbed the camera. Even at times like that...most especially times like that!...we all need some comedic relief. PS Look at how SKINNY I was! Once in my life for about 15-20 years!!!!

Now...there's something new going around. I have found out that I am a COW. That is...a Cranky Old Woman. See previous post for proof. Since I am from Texas...I decided that I am a Texas Longhorn COW. Watch out for those horns! (Stopped on my way home from Mama's the other day and took this...I'll try again later to see if I can't get rid of the fence. I mean like...get outta the car Sherry!) 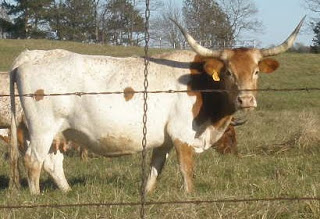 Need further proof that I am a COW? Read on...

We (friends of the library) recently catered an event for a local civic club. They arranged the use of the building. We arrived the day before to decorate and the place was filthy. So, we cleaned...setup tables and chairs...decorated...left. The next day, mid-afternoon, two or three more of our group went in to clean deeper and tackle the restroom - it was FILTHY.

When we cater, we do it buffet style. They requested Thanksgiving food. We usually do just two vegetables, but this time we went all out. In addition to turkey and dressing and the trimmings, we provided four different vegetable dishes, two different fruit salads, and instead of two desserts we served four. Buffet as I mentioned...all you can eat. Go back for seconds or even thirds if you want. $14 per person. OH! Look below and see the post about the homemade bread! One of those loaves on each table which was set for only six people!!! A comment was overheard...we were charging too much.

GIVE ME A BREAK?!