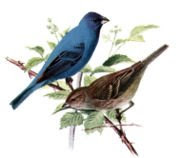 What a shame. I found a dead Indigo Bunting on the front porch this morning. Evidently he tried to fly through a bedroom window. There's nothing that could've been done to prevent his unintentional suicide, but it's still sad.

It's not unusual to hear a thump and realize that a bird has tried to fly into the house. This is probably only the second dead bird that I've found in five years that I would pretty much bet died from hitting a window. In our master bath, we have a corner with a window on both walls (above the jacuzzi tub). Many, many times I've heard a bird hit one of those windows knowing full well that it intended to just fly through.

For a few springs running, we had a Taninger attack his reflection in my sewing room window. It would've been funny except he would start around 6 or 6:30 a.m. ...when we were still in bed. We eventually saw the female in the redbud tree just outside that window. She would sit and preen and ignore the amorous attention of the bird on her side of the window. I could imagine hearing her say, "Um-um! Look at the good looking hunk over there. My, my, my. I sure wish he'd give me a whistle." Then her boyfriend would attack him. LOL

Before going to bed at night, we made sure to shut the sewing room door so that we couldn't hear the fighting.

First, I checked my blood pressure yesterday afternoon...108/69. So that's not bad. I found some 'exercises' on WebMD for vertigo...sit on the bed....turn your head to the right...lay down to the left...sit up...look to the left...lay down to the right. Each time you let the swimming head ease up between each move. I did them right before going to bed. I was so sick feeling at first, but this morning I haven't felt bad at all. Of course I haven't bent over either!

It is a beautiful spring day! Temps are rising a bit each day but we haven't had to turn the a/c on yet. For the past two or three months our electricity has cost us $55 or so dollars. We could use a whole lot of that!

Yes, I still have bluebonnets even after the freeze before Easter. I am so very proud of my hostas. I planted six. Only three came up. The first year I thought I had duds...little did I know that each year they would get bigger 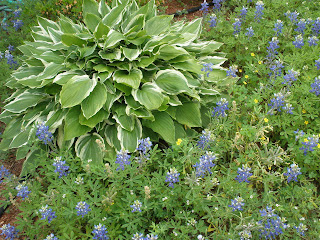 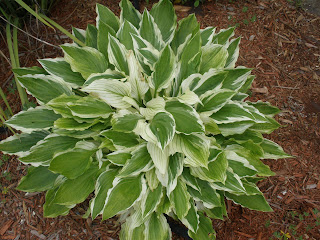 My irises are in full bloom. 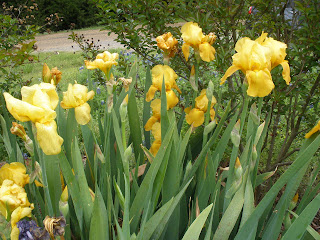 The lonely purple iris is laying on the ground though. 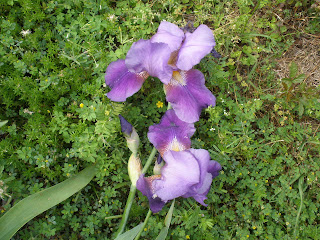 The last variety of daffodils are blooming. Aren't they such dainty little things?! 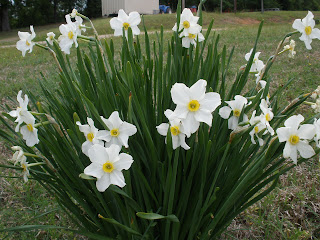 This is a French hollihock. 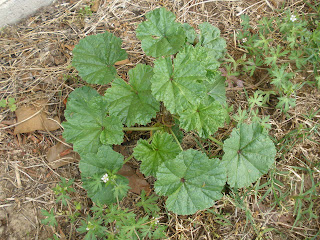 I've found two or three volunteer plants. Unfortunately they are all in the yard at the edge of the designated flower bed. I need to keep Sam off of them with the mower which means that I have to :
1. Show them to him.
2. Do the close trimming around the house.
3. Show them to him again before he gets on the tractor.
4. Enlarge the flower beds.
5. Show them to him again. ;o)
Honestly, he's not really THAT bad. But close...
I have a hanging fern that I can't water. Earlier this spring, every time we walked near the front porch, a bird flew out of one of the baskets. I found five pretty blue eggs. Sorry, but I have been known to destroy eggs left 'on' my front porch...the mother bird poops everywhere and when she cleans the nest, she drops the baby poop everywhere too. I paid really close attention to the mama bird and finally saw her plainly. A bluebird. So, the eggs stayed. I don't know how many babies there are...but aren't they just so ugly that they are cute? 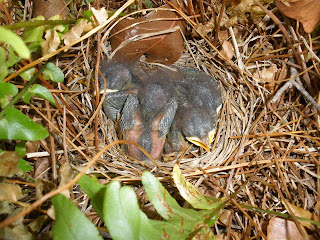 Remember the pear blossoms? I hope that the limbs are developing enough (after the severe pruning - and that is a gross understatement - that the trees received a few years ago) that I actually have enough to make at least one batch of preserves. Oh, and a few to put in the dehydrator would be nice too! 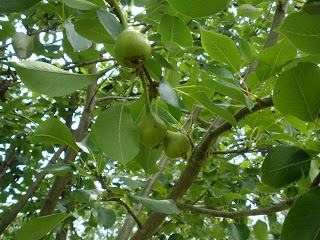 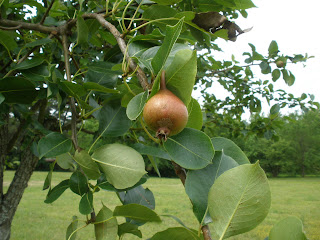 Knowing with Nicholas Cage.
Don't waste your money.
When the movie was over, the entire theatre was so quiet you could've heard a pin drop. Then I heard, "Well, I wasted my time tonight." I think that was pretty much the concensus of the entire audience.

So, let's talk about good movies! Tammy/Tisme commented on my last post about Jimmy Stewart. She liked Harvey. YES! I remember Harvey. Especially the last scene when the gate swings open all by itself. You just KNOW that Harvey walked through!
Other Jimmy Stewart movies I love:
Rear Window
Cheyenne Social Club

The Shootist (He was John Wayne's doctor)
The Flight of the Phoenix
How the West Was Won
The Man Who Shot Libery Valance
The Man Who Knew Too Much
Mr. Smith Goes to Washington
It's a Wonderful Life!!!
Probably many, many more!
Gi, Thank you for your concern about my vertigo. We have a blood pressure cuff for Sam (his BP is a 'little' high). I've never had any problem whatsoever, but I do check it every so often. This was definitely inner ear problems. When Mama had her major bout with vertigo, the doctor told us that there was nothing that could be done. A couple of days ago, I found out that there is now something available...a manipulation of the hairs in the inner ear, then wear a brace or collar or something for 24-hours to keep your head as immobile as possible. If it hits again...I'll definitely check into treatment.
I have more flowers blooming, but no photos yet. Sorry. My small sampling of yellow and purple irises are blooming as are my last variety of daffodils. Such pretty delicate blooms. I'll try to remember the camera this afternoon and post tomorrow.
at 11:07 AM 1 comment:

Do you remember Alfred Hitchock's movie, "Vertigo"? I loved Jimmy Stewart! I never understood - vertigo though. Until somewhere around 1998/99 when I had my very first full-blown episode.
A few years before that, I can remember getting up in the middle of the night making a trip to the bathroom. It's a good thing that I had all left-hand turns from the bedroom because that's the way that I listed. A bit off-keelter. Ron noticed because he was sitting up late watching an old movie. From his recliner, he had a direct shot down the hall and saw me stumbling around. I can still remember him laughing about me listing to the left. :o)
Daddy called me only twice saying, "Your mama needs you." No questions asked, I grabbed keys, jumped in the car, and flew over there. One of those times, Mama was in the bathroom floor resting her cheek on the commode. If she moved her head, she puked. (Is there a 'graceful' word for that?)
Shortly after Sam and I married and moved me and Jonathan to Lake Jackson, I had a full-blown episode...probably 1998 or 1999. For a few days I would wake in the morning, get out of the waterbed and stand there until I could get my feet under me. Then, THE morning, I couldn't get my feet under me. I swayed, the room spun, I broke out in a cold sweat before laying back across the bed. Sam, knowing that I should be getting ready for work by that time, stuck his head out of the master bath. He helped me to my feet and held me until I got steady. I'm doing okay. Go to the bathroom, sit on the commode. I'm doing okay. As it was a cool morning, I reached for my socks. I was gone. Nearly feel off the commode.
Sam got me back to bed. Mopped the sweat off me and brought me a dry gown. He left me with some crackers and a 7-Up. Like I was going to drink anything and risk having to go to the bathroom before he could get back to the house at lunch. I don't know when I've been that miserable.
I had another episode this weekend. Not as bad as the above mentioned episode which caused me to miss two days of work. But this has lingered. Just when I think I'm okay, I moved my head too quickly. Or flop over in the middle of the night to change position.
Last night while getting ready to make stewed potatoes, I dropped a piece of potato in the floor. I almost bent down to retrieve it. Caught myself. Sam picked it up for me on his way through the kitchen.
This too shall pass.
Might as well leave you with a recipe...
Stewed Potatoes
Peel and dice as many potatoes as you need. Allow about one potato per person. Dice them into half-inch size pieces...some larger...some smaller. Barely cover with water, season with salt and pepper, and bring to a boil. If you have a burner that turns down fairly low, use that burner. Simmer continuing to let the water bubble/almost boil so that the water cooks out. Be careful not to scorch your potatoes. Using REAL butter, put in as much in as you want. Stir until the butter is melted. Some of the potatoes will break down; this along with the butter will make a "thickening."
Enjoy!
at 3:41 PM 2 comments:

We just got back from Lake Jackson/Bay City. Sam had his 55th high school reunion at Bay City. We stopped through Lake Jackson on the way to see Jonathan and treat him and his girlfriend to dinner. There's nothing like fresh from the Gulf fried shrimp...unless it's fresh from the Gulf fried oysters that we ate in Matagorda Saturday for lunch!
I delivered a 'care' package for Jonathan with home canned salsa, jellies, and preserves. I also handed over his lienne/tunic to wear with his kilt. He sent a photo. 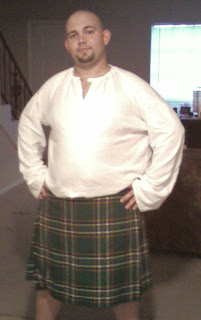 Poor darlin' takes after his dad. Ron at 25 years old had really, really thin hair when we married. Jonathan is 25 now. He found his way to deal with thinning hair.
He and Sarah are going to the International Festival in Houston. This year honors Ireland. Jonathan has several Irish ancestors.
at 6:30 PM 1 comment: