Pulling my hair out! Two days and I'm ready to throw in the towel. If you don't already know, I sub at high school...grades 9-12. I do NOT like freshmen. They left a campus where they 'thought' they were BMOC...Big Man (and I do absolutely use that term lightly) On Campus. Now they are in high school where they are on the bottom rung of the ladder again. Only they DON'T KNOW IT!!! Or else they're just trying to prove how tough they are.

HEY! Save that for out in the hall. I am NOT impressed!

Two days. I quit subbing at one of the elementary schools because of having the same fourth grade class two days in a row...little animals!

When the older kids get out of hand, I say, "Children. Stop acting like fourth graders and act like the adults you claim to be." That generally calms them down and they straighten up and do their work...or at least get quieter. That sort of psychology does NOT work with freshmen. They aren't mature enough to understand it. They are too close to being that fourth grader than being adults...

I am one of those subs that believes in handling...get tougher, louder, slam a ruler or book down and get their attention...or just stand in front of the class and not say a word waiting for silence. I don't normally write notes and 'tattle' to teachers, but today...I not only wrote notes...I named names. AND told the secretary on my way out this afternoon...and named names for her. Had it been bad enough, I would've called for a principal. I have full faith in the coach handling his biology students...the three or four that caused me problems.
at 4:51 PM 2 comments:

More about that later...

Can you guess that I've been baking? Yesterday the library Friends group catered a dinner for the Business & Professional Women. This was our second dinner for them. I volunteered to make rolls. While browsing through our cookbook, Cooking With Friends, for a recipe, I saw my mother's Butter Braid. (She put it in the cookbook as Peggy Terry's Butter Braid since the recipe came from Peggy back when they worked on the local newspaper together.) 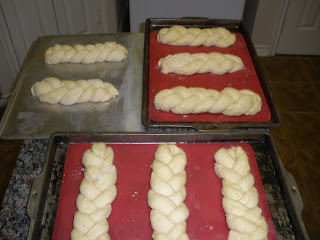 The recipe makes two large braided loaves. I made two batches of four small loaves each. I just needed four for the event, one for each table. But I couldn't make just those four loaves!!! Of course on the way to the dinner, I dropped one off at Mama's house. She clutched it to her breast and hobbled back to the kitchen as I closed the front door and locked it on my way out. 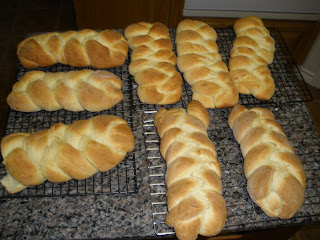 WHAT?! Someone cut a slice fresh from the oven?! Well! WHO would do that? 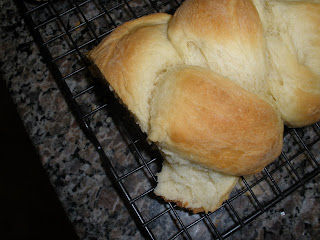 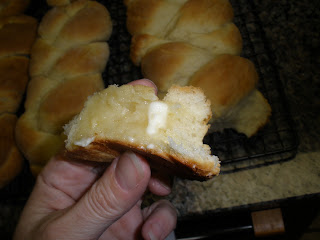 On to the near loss of an old friend. By my side through thick and thin..during those first years of marriage...waiting with me for almost 12 years lamenting my childlessness...coaching me through my months of pregnancy...one that we thought would never be. With me when Ron died. Never faltering...never failing... 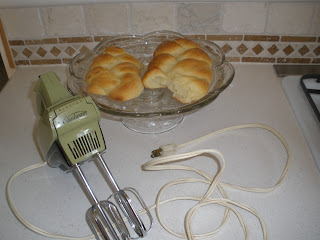 My avocado green handheld Sunbeam mixer was a gift in 1971 received in a shower prior to my first marriage to Ron Jordan. I placed it on my little kitchen island/cart and didn't set it down right. It toppled over and hit that hard, cold, loud tile floor. Arrggghhhh! I shouted and ran around the island shoving it out of my way on its caster feet. The beater eject bar (says Sunbeam on it) was laying off to one side still connected by it's lifeline of a little insignificant spring...that did not break. I picked the mixer off the floor along with the beater that fell out. Popped the errant plastic thingy back on and inserted the beater. Plugged it in. IT WORKED! The beaters barely wobble at all.

Sigh... Ain't life sweet?! ;o) And, yes. That is ALL the bread that was left before lunch today...considerably less now.

I took one of those small loaves to the meeting for those of us who stayed in the back room to have something to nibble on. Before we announced that the meal was ready, we grabbed a plate, forked some turkey, spooned some green bean bundles, and dolloped some cornbread dressing on the plate...grabbing three plastic spoons, our drinks, and the previously referenced loaf of bread, we disappeared into the darkness beyond. Well. It must've been pretty dark. I'm eating turkey, dressing, green bean bundles and look over. Those two dear friends of mine who I fully intend to name...Earlene and TomWillena!!! Had sucked that bread down!!! Just one little tiny end left! I thought they were going to fight over the last chunk!!!!! 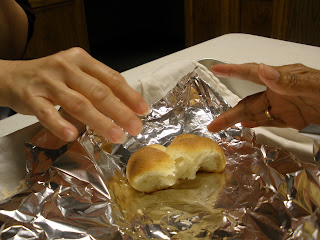 For further info on the dinner, check the side bar for the Friends of the Daingerfield Public Library.

Dissolve yeast in warm water with 1 teaspoon sugar. Cream together butter and 4 1/2 tablespoons sugar. Beat in eggs. Stir in milk and vanilla. Add yeast mixture; stir well. Combine flour and salt and add to the butter mixture. Dough will be very soft. Refrigerate, covered, several hours or overnight. Turn out on floured surface, knead, adding flour as needed. Divide dough into two pieces; then each piece into three pieces. Roll dough into long ropes. Pinch three together and braid. Repeat for remaining three pieces. Tuck ends under. Using two cookie sheets, place each braid on a cookie sheet. Let rise until double in bulk, about 1 hour and 15 minutes. Bake at 375 degrees for 30 minutes. (Remember the above photos are 4 loaves per batch and two batches.)