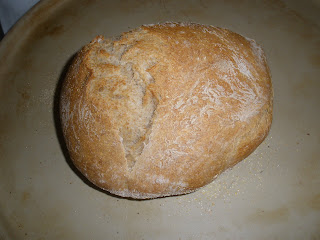 Martha over at Lines from Linderhof posted a delicious recipe of Artisan Bread. http://www.linesfromlinderhof.com/2009/08/homebaked-bread.html 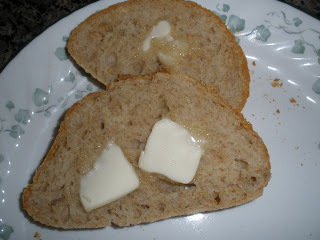 If you are expecting the taste of fresh made white yeast bread, this will be a bit of a disappointment. My BFF, Earlene, said that it tasted a bit like sourdough. I thought it tasted flat...so I worked a bit more salt in the second loaf and liked it better.


Okay. Just WHAT is artisan bread? HA! I've been making it all along! Artisan bread is bread that is not mass produced! So...okay...my single loaves of white bread (sometimes mixed with whole wheat flour) are actually artisan bread. I'm feeling oh so smug right now.

I've made mention a time or two about Sam being gone. He's home now! I don't generally advertise when we are (or he is) going to be gone. He and his youngest brother Terry rode their Harley's around the Grand Canyon. They trailered the bikes to near Flagstaff, rode around the Canyon, Terry loaded his bike up and headed back home 'cause he is still a poor working man. Sam continued the trip by going up into Colorado and visiting friends in Cedaredge and Delta. Sam was gone two full weeks!

He's HOME! I wasn't expecting him until mid-morning tomorrow but he got here about 4 or 4:30 p.m. It was so good to see him pull up in the driveway.

...We've had such mild weather that I've had the a/c turned off the last four or five days and have been sleeping with the windows open. I mean, when you get up in the morning at it's 63 degrees outside...why oh why is the a/c on?! I have soooo enjoyed it.